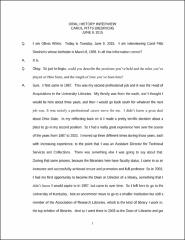 Carol Pitts Diedrichs describes her career in The Ohio State University Libraries. She was hired at Ohio State in 1987 as the Head of Acquisitions in the University Libraries. As she gained professional experience, she moved up through the ranks until she held the position of Assistant Director for Technical Services and Collections. She left Ohio State in 2003 to become Dean of Libraries at the University of Kentucky, then was recruited back to Ohio State in 2010 as the Vice Provost and Director of Libraries. During the early part of her career at Ohio State, Diedrichs was especially involved in the creation and development of OhioLINK, a state-wide consortium of libraries. After her return to Ohio State, Diedrichs focused on improving Ohio State's other libraries, including the Billy Ireland Cartoon Library Museum, and the 18th Avenue Library. Diedrichs discusses gender demographics in academic librarianship, a profession which is female-dominated, but in which a large portion of the leadership positions are held by males. She also advocates for greater diversity in the profession of academic librarianship, and describes the importance of mentoring on her own career.