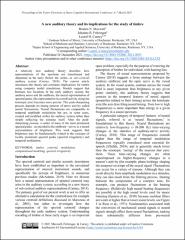 A relatively new auditory theory describes how representations of the spectrum are transformed and sharpened in the early (below the cortex, or sub-cortical) auditory system (Carney, 2018). The current article introduces this theory and considers implications for timbre using computer model simulations. Models suggest that between two locations in the early auditory system, the auditory nerve and the midbrain, the neural representation of spectral peaks (the representation in overall activity along the tonotopic axis) becomes more precise. This peak-sharpening process depends on timing patterns of nerve activity called neural fluctuations. Neural fluctuations are comparable to temporal amplitude modulation but are, in some cases, created and modified within the auditory system rather than simply reflecting the stimulus itself. After the peak-sharpening process, a center of mass of the most prominent spectral peaks - as encoded in the midbrain - serves as a neural representation of brightness. This work suggests that brightness may be fundamentally related to the concepts of locally prominent spectral peaks (spectral irregularity) and temporal modulation.