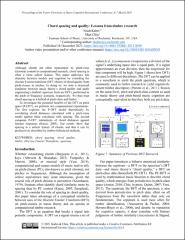 Although chords are often represented by pitch-class (chroma) content in computational research, chord spacing is often a more salient feature. This paper addresses this disparity between models and cognition by extending the discrete Fourier transform (DFT) theory of chord quality from pitch-classes to pitches. In doing so, we note a structural similarity between music theory's chord quality and audio engineering's timbral cepstrum: both are DFTs, performed in the pitch or frequency domains, respectively. We thus treat chord spacing as a hybrid of pitch-class and timbre. To investigate the potential benefits of the DFT on pitch space (P-DFT), we perform two computational experiments. The first explores the P-DFT model theoretically by correlating chord distances calculated with a pitch-class model against those calculated with spacing. The second compares P-DFT estimations of chord distances against listener responses (Kuusi, 2005). Our results show that spacing is a salient feature of chords, and that it can be productively described by timbre-influenced methods.