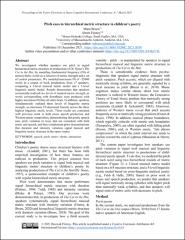 We investigated whether speakers use pitch to signal hierarchical metric structure in productions of Dr. Seuss's The Cat in the Hat, by modeling fundamental frequency (F0) of monosyllabic words as a function of metric strength and a set of control parameters. We modeled maximum F0 of ~25000 words in a corpus of book productions from 17 speakers, comparing a 3-level musical metric model and a 5-level linguistic metric model. Results demonstrate that speakers consistently realized two levels of musical metric strength, as words corresponding with downbeats were produced with higher maximum F0 than all other beats. In addition, speakers simultaneously realized three levels of linguistic metric strength, as maximum F0 decreased linearly across the three highest linguistic metric levels. These results are consistent with previous work in both prose speech production and Western music composition, demonstrating that poetic speech uses pitch variation in ways that are consistent with both music and speech, and they complement prior demonstrations that duration and intensity variation signal musical and linguistic metric structure in the same corpus.