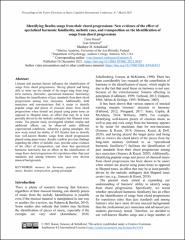 Listener and musical factors influence the identification of songs from chord progressions. Having played and being able to write out the chords of the target song from long-term memory (hereafter, specialized harmonic familiarity) facilitate the identification of jazz standards from their chord progressions among Jazz musicians. Additionally, both musicians and non-musicians find it easier to identify popular songs and pieces of classical music from chord progressions when stimuli are played using piano tones as opposed to Shepard tones, an effect that may be at least partially driven by the melodic ambiguity that Shepard tones create. The present study investigated whether similar and additional effects can be observed under different experimental conditions. Adopting a gating paradigm, this new study tested the ability of 303 Beatles fans to identify four well-known Beatles songs from chord progressions played using piano tones. Results confirm previous findings regarding the effect of melodic cues, provide some evidence of the effect of transposition, and show that specialized harmonic familiarity has an effect on the identification of songs from chord progressions for repertoires other than jazz standards and among listeners who have very diverse musical backgrounds.