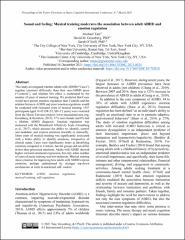 This study investigated whether adults with ADHD ("Cases") regulate emotions differently than their non-ADHD peers ("Controls"), and whether this effect is moderated by the number of years of musical training. We predicted that Cases would have poorer emotion regulation than Controls and the relation between ADHD and poor emotion regulation would be weakened with increased years of musical training. 1537 participants aged 18-65 (M=32, SD=12 years) were recruited from the Music Universe project (www.musicaluniverse.org; Greenberg, & Rentfrow, 2017). 57% were female and 8% had a lifetime ADHD diagnosis. Emotion regulation was measured with the Mentalized Affectivity Scale (Greenberg et al., 2017), which assesses the ability to: identify, control and modulate, and express emotions inwardly or outwardly. More years of musical training was significantly associated with a better ability to identify emotions, irrespective of clinical status. Cases were significantly better at identifying emotions compared to Controls, but the groups did not differ in how they processed emotions. Adults with ADHD showed higher outward emotional expression, but only when number of years of music training was low/moderate. Musical training shows promise for improving how adults with ADHD express emotions, perhaps underpinned by stronger top-down mechanisms at work in emotional self- control.