A new corpus of texture, timbre, and change in 20th-century American popular music 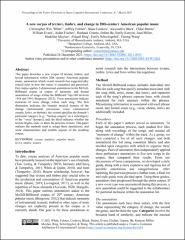 This paper describes a new corpus of texture, timbre, and lyrical information within 20th century American popular music, parameters which recent research has suggested play crucial roles in how this music is consumed and perceived. Our corpus applies 3-dimensional annotations to the McGill-Billboard corpus (a corpus of harmonic and formal annotations of songs within the Billboard Top-100 between 1958 and 1991; Burgoyne, 2012). These annotations indicate moments of sonic change within each song. The first dimension indicates the broader musical domain of the change (instrumental, percussion, voice, extramusical sounds, lyrics, or rhythm); the second specifies the domain's particular category (e.g.: "backup singers" as a subcategory of the "voice" domain); and, the third indicates whether the texture begins, ends, or alters the previous texture. This paper outlines the methods used to assign these annotations, and some characteristics and notable aspects of the resulting corpus.