Musical instrument, personality and interpretation: Music cognition at a college-conservatory 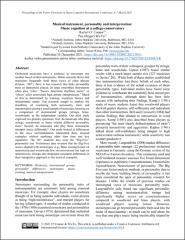 Orchestral musicians have a tendency to stereotype one another based on their instruments. While research shows that musicians frequently hold these views of other players (Lipton, 1987), there is less research that links personality traits to instrument played. In large ensembles instruments often play ‘roles:' "basses determine rhythmic pulse," or "oboes' solos necessitate high artistic interpretation." Much of this is determined by training, reception history and instrumental sound. Our research sought to explore the feasibility of examining both personality traits and interpretation among a small sample of musicians focusing on a comparison of instrumental groups (strings, brass, woodwinds) as the independent variable. Our pilot study explored two primary questions: first, do musicians who play strings, woodwinds or brass exhibit different personality traits? Second, do musicians who play these instruments interpret music differently? Our study looked at differences in the ways instrumentalists interpreted three musical examples without markings other than time and key signatures. The 40+ students also took the "Big-Five" personality test. Preliminary data revealed that the Big-Five scores aligned with stereotypes (e.g., brass scoring lowest on neuroticism and woodwinds low on extraversion but high on neuroticism). Groups also displayed consistent differences in their interpretive approach to the musical examples.