Referential and Non-referential (Im)politeness: The Use of Honorifics in Face-attacking Acts in a Japanese Company's Orientation Meeting 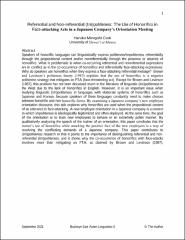 Speakers of honorific languages can linguistically express politeness/impoliteness referentially through the propositional content and/or nonreferentially through the presence or absence of honorifics. What is problematic is when co-occurring referential and nonreferential expressions are in conflict as in the co-occurrence of honorifics and referentially face-attacking expressions. Why do speakers use honorifics when they express a face-attacking referential message? Brown and Levinson's politeness theory (1987) explains that the use of honorifics is a negative politeness strategy that mitigates an FTA (face-threatening act). Except for Brown and Levinson (1987), this problem has not been discussed much in the literature of linguistic (im)politeness in the West due to the lack of honorifics in English. However, it is an important issue when studying linguistic (im)politeness in languages with elaborate systems of honorifics such as Japanese and Korean, because speakers of these languages constantly need to make choices between honorific and non-honorific forms. By examining a Japanese company's new employee orientation discourse, this talk explores why honorifics are used when the propositional content of an utterance is face-attacking. A new employee orientation in a Japanese company is a context in which impoliteness is ideologically legitimized and often deployed. At the same time, the goal of the orientation is to train new employees to behave in an extremely polite manner. By qualitatively analyzing the speech of the trainer of an orientation, this paper concludes that the trainer's use of honorifics while attacking the positive face of the new employees is a way of resolving the conflicting demands of a Japanese company. This paper contributes to (im)politeness research in that it points to the importance of distinguishing referential and nonreferential (im)politeness, and it shows why the co-occurrence of honorifics with face-attacks involves more than mitigating an FTA, as claimed by Brown and Levinson (1987).