Languages and Cultures in Action: Snippets of Interactions from Singapore 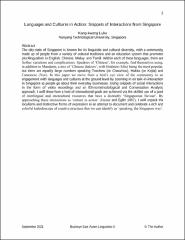 The city-state of Singapore is known for its linguistic and cultural diversity, with a community made up of people from a variety of cultural traditions and an education system that promotes plurilingualism in English, Chinese, Malay, and Tamil. Within each of these languages, there are further variations and complications. Speakers of 'Chinese', for example, find themselves using, in addition to Mandarin, a mix of 'Chinese dialects', with Hokkien (Min) being the most popular, but there are equally large numbers speaking Toechew (or Chaozhou), Hakka (or Kejia) and Cantonese (Yue). In this paper we move from a bird's eye view of the community to an engagement with languages and cultures at the ground level by zooming in on talk-in-interaction in Singapore as people go about their everyday businesses. Using snippets of social interactions in the form of video recordings and an Ethnomethodological and Conversation Analytic approach, I will show how a host of interactional goals are achieved via the skilled use of a pool of interlingual and intercultural resources that have a distinctly 'Singaporean flavour'. By approaching these interactions as 'culture in action' (Hester and Eglin 1997), I will unpack the localisms and distinctive forms of expression in an attempt to document and celebrate a rich and colorful kaleidoscope of creative practices that we can identify as 'speaking, the Singapore way'.