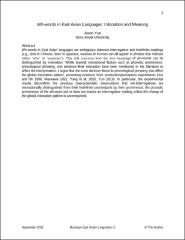 Wh-words in East Asian languages are ambiguous between interrogative and indefinite readings (e.g., shei in Chinese, dare in Japanese, nwukwu in Korean can all appear in phrases that indicate either 'who' or 'someone'). This talk concerns how the two meanings of wh-words can be distinguished by intonation. While several intonational factors such as phonetic prominence, phonological phrasing, and sentence-final intonation have been mentioned in the literature to affect the interpretation, I argue that the most decisive factor is phonological phrasing that affect the global intonation pattern, presenting evidence from production/perception experiments (Jun and Oh 1996, Maekawa 1991, Yang et al. 2020, Yun 2019). In particular, the experimental results disconfirm the previous impressionistic observations that wh-interrogatives are intonationally distinguished from their indefinite counterparts by their prominence; the prosodic prominence of the wh-word per se does not induce an interrogative reading unless the change of the global intonation pattern is accompanied.