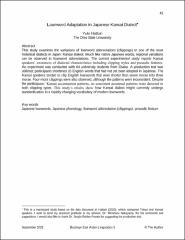 This study examines the variations of loanword abbreviations (clippings) in one of the most historical dialects in Japan: Kansai dialect. Much like native Japanese words, regional variations can be observed in loanword abbreviations. The current experimental study reports Kansai speakers' awareness of dialectal characteristics including clipping styles and prosodic features. An experiment was conducted with 64 university students from Osaka. A production test was utilized; participants shortened 20 English words that had not yet been adopted in Japanese. The Kansai speakers tended to clip English loanwords that were shorter than seven morae into three morae. Four-mora clippings were also observed, although the patterns were inconsistent. Despite the participants' Kansai accentuation patterns, no consistent accentual patterns were detected in both clipping types. This study's results show how Kansai dialect might currently undergo standardization in a rapidly changing vocabulary of modern loanwords.