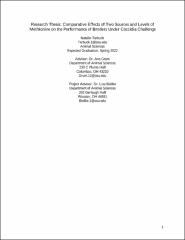 Coccidia are pervasive in the poultry industry and cause intestinal lesions, diminished growth performance, and inflammatory responses such as oxidative stress. This study hypothesized that the use of different methionine (Met) sources and inclusion levels to control inflammation will affect growth performance and clinical coccidiosis of chickens infected with Eimeria maxima. The objective of this study was to investigate the effect of two different Met sources on growth during an E. maxima infection. Treatment groups included inoculated control (IC), low Met A (L MetA), high Met A (H MetA), low Met B (L MetB), and high Met B (H MetB). Pen and feed weights were measured on d01, d8, d16, d21 and d28 to calculate body weight gain (BWG), percent change in body weight gain relative to IC (%ChBWG), and feed conversion ratio (FCR). On d16, all treatments received an oral dose of 8x104 oocysts/bird of Eimeria maxima Guelph strain, with intestinal lesion scores (LS) recorded on d21. After d19, all mortalities were necropsied and scored as either coccidiosis-positive or coccidiosis-negative. Fresh feces were collected twice daily from each pen from d19-28 and combined to monitor average daily shedding of oocysts (ADS). The results showed improvement of BWG during the d16-d20 disease period, in which BWG increased for Met A and B diets compared to IC (p<0.05). Although no differences in mean LS were observed between treatments in either room, the distribution suggested a positive impact of Met A and Met B on reducing lesion severity. Upon evaluation of ADS, Room 1 presented a clear reduction in ADS for all Met A and Met B treatments compared to CC (p < 0.05), while no difference in ADS was observed in Room 2. In conclusion, this study suggests varying methionine levels can affect severity of coccidiosis, regardless of source, and may be beneficial in supporting healthier and more productive flocks.