Recreating the "Origins of the Elements" Planetarium Show and Curriculum Module 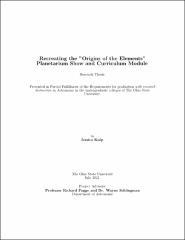 In 2019, OSU Astronomy student Krisann Stephany created the original "Origins of the Elements" planetarium show and curriculum module for the Arne Slettebak Planetarium at the Ohio State University (OSU). It was created as part of the Broader Impacts component of a National Science Foundation (NSF) grant to OSU Professor Richard Pogge. This program was designed to educate middle and high school students about the many ways in which elements are formed in our universe. The original objective of this thesis project was to adapt Krisann Stephany's planetarium show for the recently upgraded software in the Arne Slettebak Planetarium under the guidance of planetarium director Dr. Wayne Schlingman and Professor Richard Pogge. Due to the COVID-19 pandemic, the planetarium was not accessible at the time this project began. Thus, the objective of the project changed from simply adapting the show to entirely recreating it, using the information gained from piloting it the first time. This gave us the opportunity to focus on creating an engaging, educational, and well-structured narrative for the show before even stepping foot in the planetarium. This reinvented narrative of "Origins of the Elements" progresses through the periodic table from hydrogen to the heavy synthetic elements, discussing their origins by simultaneously progressing through stellar evolution and the history of the universe. Restructuring the show into a more logical progression is intended to make "Origins of the Elements" more captivating, memorable, and easier to follow. Based upon this updated narrative structure, I developed a new script, new 3D graphics, and a detailed storyboard version of the show. This storyboard, along with my narration of the script, eventually became a product of its own in the form of a video adaptation of the show. The original "Origins of the Elements" curriculum module was also updated to improve the classroom experience based on feedback from the pilot. The video adaptation of "Origins of the Elements" along with its updated curriculum module are intended to be distributed to middle school science classes as a distance-learning module. The major results of this project were the restructuring of the show, the creation of new graphics and a storyboard, and the completion of this distance-learning module. Moving forward, the video version of "Origins of the Elements" will be adapted for the Arne Slettebak Planetarium at OSU, aiming for completion in the summer of 2021.