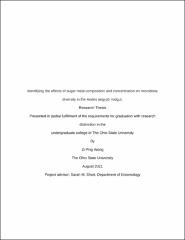 Aedes aegypti are a well-known source of vector borne diseases (World Health Organization, 2020). These female mosquitoes transmit disease via blood feeding. Their midguts contain microbiota that influence their physiology (i.e., immune function). and are the tissue through which human pathogens invade after a blood meal. Sugar is a vital source of the mosquito diet, which mosquitoes obtain from flower nectar. Sugar alters microbiota composition in the midgut because sugar feeding affects mosquito physiology. Nectars have been found to have variable sucrose and fructose compositions. Thus, we were interested in investigating varying ranges of sucrose and fructose to see their effects on the microbiota in the mosquito midgut. We used Aedes aegypti Liverpool strain mosquitoes and provided adult females with 30% sugar meals where the sugar was either 100% sucrose, 100% fructose, or 50% sucrose and 50% fructose. We dissected midguts from five females per treatment, serially diluted the homogenates, and cultured the samples on tryptic soy agar (TSA) media. We found that very few plates grew bacteria, and of the few that did grow, treatment 1 (50% sucrose, 50% fructose) had the most bacterial growth on TSA plates. Among the bacteria we cultured, we only found two types of bacteria. These findings suggest either that the midgut microbiota does not grow favorably on TSA plates, there were few bacteria in the midgut at the time of the experiment, or few bacteria grew favorably with the applied sugar treatments. The bacteria we did find might be more prevalent in the mosquito microbiota or might be the only bacteria that grow in the treatments we applied. Further research would be required to identify these bacteria to species and confirm the repeatability of the results.