Contagious Holiness in the Priestly Tabernacle 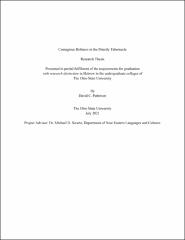