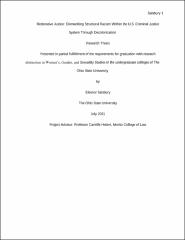 This paper explores restorative justice as a function to effectively dismantle structural racism in the U.S. criminal justice system through a decolonization lens. The significance of my inquiry is to analyze how the mainstream philosophy of punishment for criminal acts, retributive justice, that is taught in the law school education setting not only fails to make those guilty understand the harm of their actions, but also fails to achieve justice for victims involved. Retributive justice feeds into institutional racism by maintaining an unjust plea bargain system, fails to weaken environments that encourage recidivism, and funneling the labor of offenders into mass incarceration for the government's benefit, all excessively impacting People of Color compared to their white counterparts and endangering in particular poor single mothers of color. Because restorative justice is heavily based in Native justice systems as the "the original, pre-state form of law," it is a viable decolonization tool and is based in prison abolition. Restorative justice practices return self-determination within oppressed communities by including the offender, victim, and the community to work together to create a reparative plan and focus on healing. In order to reduce patterns of crime this approach also uses a forward-thinking, preventative model that works together with other abolition movements including breaking down the prison industrial complex and defunding the police.