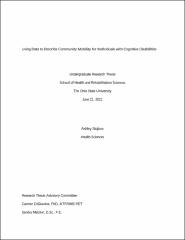 Objective: To describe usage patterns, utilization, and user interaction of a personal navigation smartphone application, WayFinder 3. Introduction: Transportation for individuals with cognitive disabilities presents several challenges. One potential solution to alleviate these barriers could be the use of mainstream technology such as a smartphone. One smartphone application that includes features to meet the personal navigation needs of individuals with disabilities is WayFinder. Methods: As a sub-component of the Mobility Assistance for People with Cognitive Disabilities (MAPCD) project, this descriptive study retrospectively described and categorized trip data from the implementation phase of the MAPCD project. Results: Data from the SMART (Specialized Media for Assistive Route Travel) Travel Manager, an online portal that allows a caregiver or community specialist to track a traveler in real-time while they are taking a trip using the WayFinder app, were evaluated on an individual basis to determine trip-end status and trip interaction types. The three trip-end statuses identified were completed, cancelled, and in-progress and the three trip interaction types identified were high user interaction, low user interaction, and other. The most common trip-end status for trips taken by travelers was cancelled, followed by completed and in-progress, and the most common trip interaction type taken by travelers was low user interaction, followed by other and high user interaction. Discussion: A method for categorizing trips was developed based on percentages of user interaction with waypoint notifications. By measuring user interaction and usage patterns of the WayFinder app, it can help determine if the app was effective in helping individuals travel in their communities. However, this metric for categorizing user interaction with trips is not the only method that should be used when determining perceived benefit of the WayFinder system.