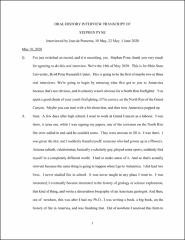 Although Stephen Pyne is best known as a historian of fire, his book The Ice (1986) continues to be regarded by many as one of the most important contributions to Antarctic literature. The writing of The Ice is the focus of this oral history. Parts 1 & 2 focus on his journey to Antarctica and what he found there. Part 3 focuses on the writing and reception of The Ice. Stephen Pyne was born in the United States in 1949. He attended Brophy, a Jesuit high School in Phoenix, Arizona, and went on to obtain a Bachelors Degree from Stanford University. He later attended the University of Texas, Austin, where attained his Masters degree in 1974 and his PhD in 1976. In parallel to his studies and research, he spent fifteen seasons (1967-1981) as a wildland firefighter on the North Rim of Grand Canyon National Park. Pyne's first book was a biography of pioneering geologist Grove Karl Gilbert. His second was entitled Fire in America: A Cultural History of Wildland and Rural Fire (1982) and started a lifelong interest in the human and environmental history of fire. In 1981, despite not having any prior interest in the Polar Regions, he received an invitation to apply for an Antarctic Fellowship funded by the National Endowment for the Humanities. In his application, he proposed to write a general history of the earth sciences with Antarctica as part of the story. He was granted the fellowship on this basis and spent three months in Antarctica during the austral summer of 1981-1982. As a guest of the Unites States Antarctic Program (USAP), Pyne flew from Christchurch, New Zealand, to McMurdo Station on Ross Island. At McMurdo he followed a mandatory field-training course and accustomed himself to US Antarctic logistics, science and culture. From there, he accompanied a geological field party to North Victoria Land where he spent two weeks and realized for the first time that his book would need to refocus entirely on Antarctica and its primordial element: ice. After spending some more time in the field in the Allan Hills and the Dry Valleys, Pyne returned to McMurdo and asked to visit Dome C where the USAP had established a field camp in collaboration with French scientists. Before travelling to Dome C, however, he was first sent to spend about a week at the South Pole for altitude acclimatisation. Pyne spent around ten days at Dome C and accustomed himself to the unique environmental specificities of what he went on to refer to as the 'source region'. Following his stay at Dome C, Pyne returned to McMurdo and embarked on the icebreaker USS Glacier aboard which he sailed back to Punta Arenas, Chile, via the Amundsen Sea and the United States' Palmer Station on Anvers Island along the coast of the Antarctic Peninsula. Back home at the University of Iowa where he was employed at the time, he got caught up in more pressing commissions focusing on the history of fire and of the Grand Canyon and did not have the time to write his Antarctic book. Eventually, he decided to take a leave of absence from the University of Iowa in order to write the book. With no money except what little savings he had with his wife, Pyne returned to Arizona, stopped everything and wrote furiously for four months to get the book finished before money ran out. This done, he took up a temporary job whilst working on edits and rewrites. When presented with the final draft, Pyne’s intended publisher, Oxford University Press, with whom he had an advance contract, rejected it. Another university press refused to publish the text unless it was cut in half. He declined and The Ice was eventually published by the nascent University of Iowa Press in 1986. Against all expectations, the book received a highly complementary review from the New York Times and was selected as one of the Times' ten best books for 1987. It has now been republished seven times in both hard and paper-back editions in both the US and the UK. Following the publication of The Ice, Pyne returned to his interest on fire, writing more than twenty books on the subject. These where interspersed with a smaller number books on what he identified as the three great ages of discovery, as well as on writing techniques for history and nonfiction. He spent the rest of his teaching career at Arizona State University (ASU), mostly as a member of School of Life Sciences to which he transferred in 1999. He remains an emeritus professor at ASU and continues to live in the wider Phoenix agglomeration where he raises Tunis sheep with his wife Sonja. Despite standing alone within his wider oeuvre, Pyne still considers The Ice to be his best book: the one that is most likely to stand the test of time.