The School-to-Prison Pipeline among Black American Boys in Central Ohio: The Influence of Childhood Trauma 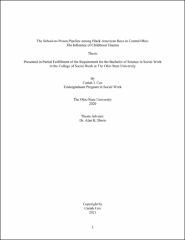 Introduction: Studies indicate that Black-American boys overpopulate the Juvenile Justice System (JJS). This overpopulation is a result of the school-to-prison pipeline; a national trend where children are transferred out of public schools into the JJS. This study expands upon the school-to-prison pipeline literature by examining if childhood trauma, measured using the Adverse Childhood Experiences Questionnaire (ACEs; Possible range 0-10; higher scores = more trauma), is a contributing factor leading Black-American boys into the school-to-prison pipeline. Methods: A mixed method cross-sectional design was used to collect data on Black American ex-juvenile male offenders in central Ohio (n=67; mean age=25.7, SD=4.0). Aims:1) examine whether the number of ACEs were associated with the age that Black-American juveniles became involved in the JJS, the number of years incarcerated, or the frequency of school discipline (expulsion/suspension) began; 2) explore if the school security and discipline measures within the schools of Black-American boys in Central Ohio schools; 3) explore perspectives regarding what is needed to deter Black-American juveniles' entry into the school-to-prison pipeline in central Ohio schools; and 4) investigate the racial composition of teachers and cultural factors related to the school environment of Black-American boys when they engaged in the JJS. Results: Participants' mean age of adjudication was 13.1(SD=2.6) and the mean ACEs score was 6.1 (SD=4.0). Regarding Aim 1, there was no statistically significant relationship between ACE scores and the age juveniles encountered the JJS (r= -.10; p=0.203). There was a marginally significant relationship between ACE scores and the length of sentencing (r = .019; p =. 057)., Regarding Aim 2, a positive relationship between ACE scores and frequency of suspension was found (r=.29; p=0.035), showing that the more childhood trauma experienced in the sample, the more times they were suspended as an adolescent. Additionally, 82% of participants were suspended more than once. Next, findings revealed that increased levels of school security impacted school discipline and racial inequities. Specifically, a significant positive relationship was found between police officers being present in their school and number of times they were suspended/expelled (r=.24; p=.027). Another positive relationship was revealed between metal detectors being present in their school and wrongdoing suspiciousness because of race (r=.32; p=.004). Moreover, there was a significant negative relationship between ACEs scores and the school security measure, security guards (r =-.37; p = .001); meaning presence of school security guards was associated with lower ACEs scores. The disciplines related to each level of security shows that the more militant the security, the more severe the consequence (i.e., school discipline, racial inequalities) and report of more ACEs. Regarding Aim 3, exploration of racial compositions of teachers revealed a positive correlation between being subjected to unfair treatment from a teacher because of race and being suspected of wrong because of race (r=0.34, p=0.003). Regarding Aim 4, participants reported wanting family love (36%) and opportunities assisting with academic/professional career goals (26%) during adolescence. Conclusion: The findings from this study indicate that increased trauma is positively correlated with increased school discipline measures such as metal detectors and police officers being present within school buildings compared to security guards. Given these findings, school administrators should consider having a guidance counselor or social worker evaluate trauma history and the needs of a child prior to resorting to disciplinary actions. Future research is needed to design better education interventions addressing the needs of Black-American boys prior to taking disciplinary actions, with a focus on helping them cope with childhood trauma.

The College of Social Work