Wage Gaps in the American Workplace for Multiracial and Multiethnic Individuals 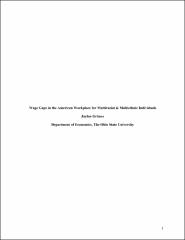 With the ethnic composition of the domestic population becoming more diverse with each passing generation, the wages of multiracial/multiethnic individuals should be analyzed in order to detect any significant deviations in earnings. While previous literature of this nature doesn't always explicitly take multiracial individuals into account, trends in earnings for different races predicted lower earnings on average for individuals of mixed African-American and/or Native American descent. With the exception of individuals who identify as Caucasian and African-American, these predictions held true in the findings of this paper, the results of which were calculated using a combination of linear regression and F-tests for significance on a customized data subset of the National Longitudinal Survey of Youth 1979 (NLSY79). It's important to note that many of these wage gaps can be attributed to differences in factors like age and education between different groups of workers.