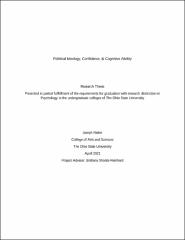 Political conservativism has been associated with lower cognitive ability, including lower numeracy (math ability) and higher perceptions of their own ability including higher perceived math ability (numeric self-efficacy). It has been suggested that this is evidence of overconfidence on the part of conservatives, but conservatism has not been linked with overconfidence per se. In the current research, we investigated correlations of political conservatism with cognitive ability, self-efficacy, and measures of overconfidence, including overestimation of the number of items correctly answered on a test of numeracy and over placement of math ability relative to others. We also measured additional ability measures, education, general self-efficacy, and narcissism (a general measure of overconfidence). Cognitive ability was operationalized through a basic mathematics test, spatial reasoning, and a basic vocabulary test. Each ability variable was correlated with one another, and a standardized ability variable was created. We used a sample of N= 831 MTurk workers recruited from Cloud Research. We found only ability, self-efficacy, numeric efficacy (i.e., not measures of overconfidence) predicted ideology. In an exploratory regression using measures of numeric confidence, narcissism, general self-efficacy, cognitive ability, and education, greater conservatism was associated with lower ability, b(se)= −0.166 (0.057), p=.004, higher general self-efficacy, b(se)= 0.171 (0.051), p=.001, and higher subjective numeracy b(se)= 0.080 (0.037), p=.033. Based on these findings, we suggest the relationship between political ideology and numeracy is better stated as an issue of confidence rather than overconfidence. It appears that conservatives have generally high efficacy, but when asked to give specific judgments about their ability, they do not systematically overestimate it.

The Undergraduate Research Scholarship offered $5,000 to go towards tuition during the completion of this project.