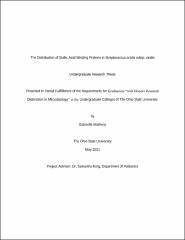 Streptococcus oralis subsp. oralis, a commensal of the human oral cavity, can enter the bloodstream and cause sub-acute infective endocarditis (IE). The dogma is IE develops when bacteria bind platelets on damaged heart valves via sialic acid. Sialic acid binding adhesins found in S. oralis subsp. oralis are Associated with Sialic acid Adhesion A (AsaA) and Fimbria-Associated Protein 1 (Fap1). Both bind sialic acid via Sialic acid binding immunoglobulin-like lectin (Siglec)-like domains within their non-repeat regions but consist mainly of different repeats. This project's purpose was to determine the distribution, genomic context, and diversity of AsaA and Fap1 with the long-term goal of defining biological consequences of encoding them. Of the 61 S. oralis subsp. oralis strains used, 12 (20%) encode asaA, 35 (57%) encode fap1, and 14 (23%) encode neither. No strain contained both asaA and fap1, even though they are found in distinct but conserved loci. In the asaA locus, asaA is always accompanied by zmpB, but some asaA negative strains also contain zmpB. It is likely asaA and zmpB were acquired through the same gene transfer event, as zmpB is more conserved in asaA positive strains than in asaA negative strains. Like the asaA locus, the fap1 locus also has variation in the genes present. However, no correlation exists between genes in the highly variable region downstream of the fap1 locus and the presence or absence of fap1. Alleles of each adhesin are highly conserved and the Siglec-like and Unique domains share predicted structural similarity. Yet, the Siglec-like domains of AsaA and Fap1 share low sequence identity, suggesting AsaA and Fap1 may bind different sialic acid containing glycans. The mechanism of how the IE-isolated strains lacking asaA and fap1 cause IE is unknown. They may encode a novel sialic acid adhesin, bind platelets through a sialic acid-independent mechanism, or cause IE by binding other host components. This study furthered the understanding of the mechanisms S. oralis subsp. oralis use to cause IE and provided information that may be valuable when establishing therapeutic targets for treatment.

Except where otherwise noted, this item's license is described as Attribution-NonCommercial-ShareAlike 4.0 International