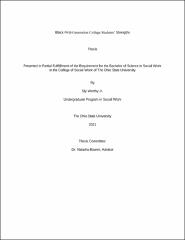 The study in this article investigated the strengths of Black first-generation college students (FGCS) at The Ohio State University. Participants consisted of 119 Black FGCS, from the age of 18-25, who attended Ohio State. This cross-sectional quantitative study utilized a Qualtrics survey and the VIA-IS-P character strengths survey from the VIA Institute on Character. The results revealed that Black FGCS scored the highest in Kindness, Fairness, Perspective, Honesty, and Curiosity. Males scored higher in Curiosity, Creativity, and Bravery than females. Hope, Leadership, Gratitude, Bravery, Zest, and Perseverance had a positive correlation with age. Students who identified as Pell Grant eligible or who were unsure about their Pell Grant status scored lower in Bravery and Leadership than those who were not Pell Grant eligible. Students who had a grade point average of 3.0 – 3.499 scored higher in Creativity, Bravery, and Zest than students who had a grade point average below 3.0 and 3.5 and above. This study established that Black FGCS scored high in all 24-character strengths measured. Therefore, their lower performance on average in higher education is not due to character flaws, but more likely to environmental factors. The findings suggest we should build interventions around this population's strengths, we need to conduct more research on the population, and develop a consistent definition for what a first-generation college student is.

3rd Place at the 2021 College of Social Work Honors Showcase