The Seneca Language and Bilingual Road Signs: A Study in the Sociology of an Indigenous Language 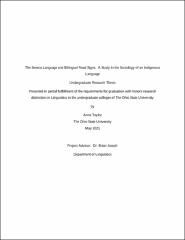 One of the fundamental types of human rights concerns collective-developmental rights which allow minorities to use heritage languages and practices without external interference (Vašák 1977). The protected status of minority language rights is a critical part of language revitalization in which speakers of heritage languages, faced with the encroachment of more socially, politically, and economically dominant languages, embark on vigorous programs to ensure the survival and continued usage of their language. The Five Nations Iroquoian language, Seneca, has just a few remaining speech communities and a variety of ongoing language revitalization initiatives (Mithun 2012). To revitalize their traditional language, community classes through the Seneca Language Department and the Faithkeepers Montessori School Seneca Language Nest for young speakers have concentrated their efforts on preserving Onöndowa'ga:' Gawë:nö' the indigenous name for the Seneca language (Bowen 2020, Murray 2015). In the public sphere, a push by the Seneca Nation of Indians Department of Transportation fulfilling the intent of the federal Native American Tourism and Improving Visitor Experience (NATIVE) Act enacted in 2016, specifically included bilingual signs for state roads running through indigenous land in addition to other significant components (Figura 2016). In an area whose geographic names are strongly connected to Iroquoian languages including Seneca, these bilingual signs represent more public and visible Seneca language presence and stand as symbols of language revitalization. The place names and information that appear on the signs have considerable significance for community identity as well as linguistic and economic impacts, among others. Through oral histories collected from Seneca Nation members and language advocates in addition to a representative from the New York State Department of Transportation, this study pursues an analysis of the Seneca public usage of their heritage language and the various language revitalization efforts occurring among indigenous and minority communities internationally. As the COVID-19 pandemic threatens already vulnerable populations, heritage languages that have been historically oppressed face a global language crisis that disproportionately harms and disadvantages speakers of heritage and minority languages (Roche 2020). While the language of road signs may seem mundane, this study reveals how the Seneca bilingual signs play a significant role in awareness of indigenous territory and consequently stimulation of the local economy as well as supporting language learning, revitalization, and de-stigmatization. Primarily through the efforts of the Seneca community, the bilingual signs represent the expression of language rights in the public sphere and one part of the ongoing language revitalization.