The 21st Century Senzala: The (de)Construction of Space in Brazil's Domestic Work Industry 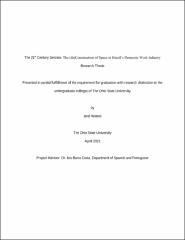 In Brazil today, it is estimated that over 6 million people are domestic workers, exercising tasks including maintenance, cleaning, childcare, and cooking in the homes of their employers. Due to the country's history of colonization and slavery, roughly 90% of these workers are women and 60% are Black. This project was inspired by the Black Brazilian activist Preta Rara, who affirms that the "modern-day slave quarters are the maid's quarters." This statement led me to question other spaces that exist that continue to subject domestic workers to the classist, racist, and gendered oppression born out of the colonial period. To respond to this question, I analyzed a series of Brazilian case studies from the past seven years, including films, comic strips, testimonies from domestic workers, and news headlines. I analyzed a wide variety of spatial constructions and practices, including separate bathrooms, separate 'service' elevators, favelas ('slums'), and, of course, the maid's quarters. I found that domestic workers are often displaced and disconnected from their social and familial networks, which then introduces them into a paternalistic relationship with their bosses. Moreover, many spatial practices aim to mark these workers as foreign when occupying the same spaces as their upper-class, white employers. Finally, I illustrate how the domestic sphere is paradoxically segregated and undifferentiated in different moments, in such a way that the bodies of these women are treated as both infrahuman and superhuman. Overall, these findings confirm that there is an undeniably spatial nature to the conception and treatment of domestic workers in Brazil. As such, I suggest that future research should similarly explore the spatial nature of the resistance of these workers.