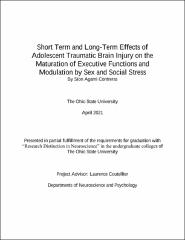 It is imperative to understand traumatic brain injuries due to the long-lasting effects of inadequate executive function development and the large spike in TBIs encountered today. Traumatic brain injuries experienced in adolescence may lead to severe behavioral and cognitive alterations that inevitably lead to a poorer quality of life in adulthood. Currently, there is no FDA approved treatment method to TBIs (Gold et al., 2013), thus understanding the mechanisms by which executive functions are affected by such injuries can provide valuable insight on how to help and treat individuals who have experienced traumatic brain injuries. We tested if traumatic brain injuries during the adolescent period affect executive function maturation through the compromise of developmental changes regarding the GABAergic System found in the Prefrontal Cortex. Along with testing for the mild traumatic brain injury (TBI), we also explored and observed the effects of social isolation following the mild TBI. We used a mouse model for this research project. Male and female mice were housed in same sex groups until they reached early adolescence. Once they reached adolescence, half of the mice experienced a mild TBI while the other half received a SHAM surgery. Following the surgery procedure, the mice were then further divided into group-housing or single housing cages to simulate social isolation. To test for long-term effects, the mice remained undisturbed until adulthood at which they underwent various behavioral assays (Puzzle Box, Open Field, and TORM Test) on PD 67 to test their executive functions. In order to test for the short-term effects associated with a TBI, the mice underwent the same behavioral assays described above, but they were not allowed to reach adulthood – they were tested for the same behavioral assays, except they started their behavioral testing on PD 40. After the completion of behavioral testing, Western Blot was run on the PFC to test for the concentrations of Myelin Basic Protein (MBP) and Parvalbumin (PV). It was found that TBI single housed males, in the short term, showed an increase in latency to enter the goal box in the problem-solving component of the puzzle box test. There were no significant effects found in any of the groups from the TORM test. There was a significant effect of PV expression found in the male SHAM groups, but there was no effect in PV signaling for the females. We found an increase in MBP expression in SHAM males compared to TBI males in the short and long term. There also seems to be a long-term effect of social isolation in both males and females.