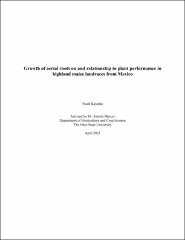 Crop diversity is a fundamental aspect of food security, allowing crops to adapt and evolve for the most efficient use of energy. As crops change from wild plants to more domesticated species, the plant adapts to environmental conditions like temperature and soil conditions (Mercer and Perales 2018). Some plants form symbiotic relationships with bacteria to achieve the nutritional needs of the plant. Legumes and some grasses like Sierra Mixe maize from highland Mexico would be an example of this adaptation. The purpose of this study is to identify highland maize landraces that can produce aerial roots and mucilage. A field study was completed with 16 varieties of maize which were analyzed for aerial root production and measured growth parameters. The analyses showed that aerial root production is a trait in multiple accessions of maize from Mexico, and that there are relationships between aerial root production and the growth of the plant. The implications of these findings could lead to research into the degree to which various maize landraces benefit from associations with nitrogen fixing bacteria.