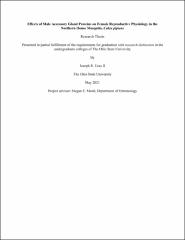 During the summer, females of the Northern House Mosquito, Culex pipiens, transmit West Nile virus to humans, while during the winter females stop biting humans and enter a dormant state. Male mosquitoes produce proteins in their accessory glands (MAGs) that are transferred to females during copulation. MAG proteins and other components of the ejaculate alter female behavior and physiology by increasing biting propensity and bloodmeal digestion, enhancing fecundity, and facilitating sperm survival in the female reproductive tract, all of which contribute to female reproductive success and disease transmission. Our earlier work suggests that males of Cx. pipiens differentially regulate several genes in their MAGs in response to seasonal cues. Specifically, Cathepsin-B-like thiol protease (CapB) and Trypsin-1 precursor (Tryp1) were upregulated in the MAGs of long day-reared males, and we hypothesize that this increases female biting propensity and fecundity. In contrast Glutathione-S-transferase (GST) was upregulated in the MAGs of short day-reared males, and we hypothesize that this may increase sperm survival in overwintering females. To test our hypotheses, we first attempted to confirm that these genes were differentially expressed in the MAGs of Cx. pipiens that were reared under long day, summer-like conditions and short day, winter-like conditions. Next, we used RNA interference (RNAi) to knock down these genes of interest in males, then allowed them to mate with virgin females and observed effects. We anticipated that knocking down CapB and Tryp1 in males would decrease the likelihood that mated females will take a blood meal and that these females will produce fewer offspring. In contrast, we predicted that knocking down GST in males would result in lower sperm survival in overwintering females. Our results showed that CapB, Tryp1 and GST are not differentially expressed in long day vs short day-reared males. We found that injecting males with dsRNA had variable effects on the transcript levels of targeted genes, reducing GST mRNAs but increasing CapB mRNA. Females that mated with males injected with CapB dsRNA were less likely to take a blood meal. We were unable to significantly knock down Tryp1 in males. Although females that mated with Tryp1 dsRNA- injected males showed no significant differences in the number of eggs laid or larvae hatched, they did lay eggs that fell apart more easily than other groups. Our results suggest that MAG- derived CapB and Tryp1 have effects on female reproductive behavior and physiology.