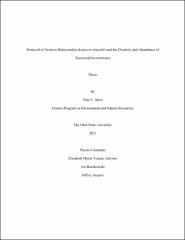 The purpose of this study was to determine what effect, if any, the removal of honeysuckle (Lonicera maacki) has on the diversity and abundance of terrestrial invertebrates in riparian areas. The study took place at 10 different sites along the Little Miami River in Greene County, Ohio. There were 4 sites where honeysuckle had been successfully removed, 3 where the site was fully invaded, and 3 that had had removal done, but had experienced some comeback. Leaf litter samples were collected at each site a total of 3 times. After collection, the leaf litter was placed in Berlese funnels to extract the terrestrial invertebrates. Once the invertebrates had been extracted, they were counted, identified to the taxonomic level of Order, and then dried to determine biomass. Data analysis showed that there was no significant difference between the abundance, diversity or biomass of the invertebrates found between the different types of sites. Future research may want to explore a similar question but identify the invertebrates to the level of Species.