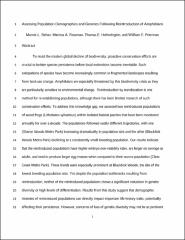 To resist the modern global decline of biodiversity, proactive conservation efforts are crucial to bolster species persistence before local extinctions become inevitable. Such extirpations of species have become increasingly common in fragmented landscapes resulting from land-use change. Amphibians are especially threatened by this biodiversity crisis as they are particularly sensitive to environmental change. Reintroduction by translocation is one method for re-establishing populations, although there has been limited research of such conservation efforts. To address this knowledge gap, we assessed two reintroduced populations of wood frogs (Lithobates sylvaticus) within isolated habitat patches that have been monitored annually for over a decade. The populations followed vastly different trajectories, with one (Sharon Woods Metro Park) increasing dramatically in population size and the other (Blacklick Woods Metro Park) declining to a consistently small breeding population. Our results indicate that the reintroduced populations have higher embryo non-viability rates, are larger on average as adults, and tend to produce larger egg masses when compared to their source population (Clear Creek Metro Park). These trends were especially prominent at Blacklick Woods, the site of the lowest breeding population size. Yet despite the population bottlenecks resulting from reintroduction, neither of the reintroduced populations shows a significant reduction in genetic diversity or high levels of differentiation. Results from this study suggest that demographic histories of reintroduced populations can directly impact important life history traits, potentially affecting their persistence. However, concerns of loss of genetic diversity may not be as pertinent at the scale of this study. Future translocation attempts may benefit from additional supplementation over time to support the newly established population, but lack of severe genetic consequences is promising for the future of reintroduced populations.