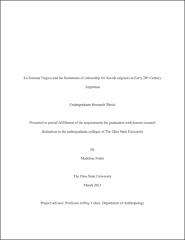 In her book, Forced Out and Fenced In: Immigration Tales From the Field, Professor of Sociology at University of California Merced Tanya Maria Golash-Boza states: "Illegality is a status people move in and out of," (Golash-Boza xi). Newer studies in immigration research define legality and illegality as both societal and legal labels, as opposed to simply a legal one. A debate that emerged in the early 1900s, the question of an individual's "belonging" somewhere according to the law has evolved with the ever-changing conflicts, borders, and alliances that govern the modern world. The issue of legality and national identity is one that has shaped the narrative of Jewish people for centuries, and with the advent of this new social discourse, greatly impacted their existence. For the most part, Jewish immigrants were able to arrive legally to Argentina en masse, so why is this study of immigration law important? Primarily because today's definitions of race and nationality differ from those of the nineteenth and twentieth centuries. Argentine Jews throughout history have been largely white and Eastern European, which at the time granted them a measure of legality, but they were also Jews, designating them to a wholly unique space. For immigrant Jews, this question of status was not entirely dictated by the state, but rather originated from it. As described by Golash-Boza in Forced Out and Fenced In: Immigration Tales From the Field, that sphere of legality extends beyond the people it primarily refers to and additionally applies to the surrounding society. If one is legal then the others are illegal. If one belongs then the others do not. It becomes a means of separation and "othering" and alienation that is not unique to the Jewish experience but rather is universal to the immigrant one.