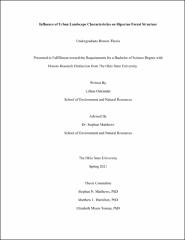 Riparian forests benefit the local communities in which they exist by providing ecosystem services, contributions made through natural functions and processes that assist humans. As urban encroachment on these forests grows with increasing urban populations, it is crucial to understand and manage riparian forests effectively in order to retain these functions. Because urbanization exerts pressures on a landscape scale, human development becomes the dominant matrix condition in which these forests exist. Most ecological studies that quantify urbanization metrics account for physical characteristics of the landscape, but few involve anthropogenic and social variables. This study was conducted to identify components of the neighborhoods surrounding urban forests that may influence vegetation structure and diversity. The sites used in this analysis were urban riparian forests around Columbus, Ohio with a rich history of research on restoration and avian communities' response to urban landscapes. This study utilized historical vegetation survey data paired with census data regarding the surrounding neighborhoods. Linear models were constructed in order to identify significant relationships between census variables and response variables concerning basal area and a diversity index of the forests. After using an information-theoretic approach to assess the relevance of each model, it was found that forests within areas of newer development tended to have lower basal areas and less diversity than those within older neighborhoods. Several models were found to capture a significant amount of the variation in the dataset, including those containing variables such as total population and a previously calculated urban index value accounting for land cover and number of buildings. The results of this study suggest that additional variables concerning the neighborhoods around forest sites could be useful to include in urbanization metrics. These datasets are often widely available online to the public and could add meaningful dimensions to future analyses on urbanization impacts on riparian forests.

The ideas for this project were developed while working under financial support provided by the U.S. Department of Agriculture Forest Service through agreement 17-CA-11132546-023.