The Effects of a Native Fish Reintroduction on Resident Fish Assemblages 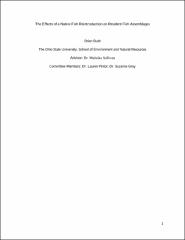