"The country is full": Are outgroups ostracized when they are perceived as burdensome? 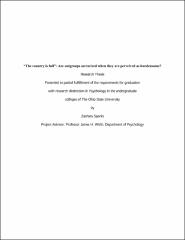 Individuals protect their group by ostracizing (excluding and ignoring) burdensome group members, those who keep a group from achieving its goals. In intragroup interactions (within a single group), burdensome members cause individuals psychological pain (pain closely associated with physical pain) which prompts the ostracism of the burdensome group member. Many social interactions occur at an intergroup (between group) level though, leading to the question of whether ostracizing a burdensome group member in an intragroup context may translate to an intergroup experience. To test this question, I utilized a minimal groups paradigm to establish group membership through an estimation task (i.e., Over-vs. Under-estimators). Participants then read about an outgroup that was described as burdensome or beneficial (Outgroup Description) before imagining an interaction with either an ingroup or outgroup (Evaluation Group) and answered questions assessing participants' psychological pain, temptations to ostracize the group, how participants' pain influenced their temptations to ostracize the group, and negative affect. Results indicate that reading about a burdensome group produced more negative responses than reading about a non-burdensome group (Fs (1, 502) ≥ 6.09, ps ≤ .014; except negative affect (F(1, 502) = 0.20, p = .656). The results pattern also indicates a significant Outgroup Description and Evaluation Group interaction, for all outcomes (Fs (1, 502) ≥ 35.12, ps < .001). Reading about a burdensome outgroup and then interacting with that outgroup was significantly worse than interacting with an outgroup that was described as beneficial or interacting with an ingroup at either level of burden. I conducted another study, using realistic culture groups, instead of minimal groups, which also found a link between burden and ostracism, but with limitations. Collectively these studies establish the link between burden and ostracism, previously researched at the intragroup level, also functions at an intergroup level. Further, certain groups, if portrayed as burdensome, may be vulnerable to being labeled out of society (i.e., ostracized) by another group.