Autonomy, Birth Control, and Intersectionality: Women's Ability to Control Their Own Bodies 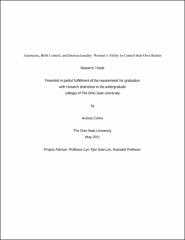