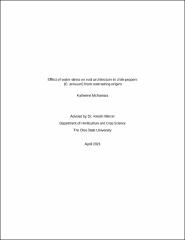 Chile peppers (Capsicum spp.) have significant cultural, economic, and culinary impact throughout much of the world. However, chile pepper production is vulnerable to climate change and the accelerated risk of drought. To combat these setbacks in productivity, growers will need to utilize chile accessions that are adapted to better handle water stress. These more drought-hardy chiles may be found in Mexico, a center of domestication for chile pepper, which has many local varieties (landraces) that possess adaptations to the environments where they evolved. The accessions that have evolved in arid climates may possess adaptations to droughty conditions that allow them to more efficiently mine for water, as will be necessary in the hotter climate we will soon be facing. One metric strongly tied to water uptake ability is a plant's root architecture (the spatial configuration of roots within the soil), but it has not been studied extensively, especially in broadleaf crops like chiles. To explore the adaptations of chile root systems to the level of moisture in their environments of origin, landrace germplasm was selected from areas around Mexico with high, moderate, and low precipitation levels. Plants were germinated under uniform conditions, then grown under two levels of water stress and harvested five weeks after planting. Their roots were then scanned and analyzed to identify differences in root architecture between genotypes, between water stress levels, and among genotypes in response to water stress. We predicted that the accessions with higher water uptake ability would have lower root to shoot ratios, higher specific root lengths, and lower surface areas than the less drought-tolerant accessions. We also expected that water stress would enhance traits associated with high water uptake. We found that chiles originating from environments of moderate precipitation tended to be the tallest, and that plants grown under droughty conditions had shorter, lighter shoots, and roots that were thinner, lighter, and had lower total lengths than plants in the control group. We also determined that specific root length is dependent upon the interaction between a chile's genetic makeup and its environment, although no clear trend is apparent vis-à-vis its environment of origin. Further research will be necessary to clarify our results and to increase the understanding of beneficial root architecture traits that may someday be bred into commercial cultivars.