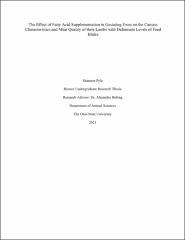 Previous research has shown that supplementation of gestating ewes with long chain fatty acids rich in the omega-3 fatty acids eicosapentaenoic (EPA) and docosahexaenoic acids (DHA) increased the growth of their offspring compared to those ewes supplemented with mono-unsaturated fatty acid (MUFA). However, the effect gestational nutrition on meat quality have not been evaluated. The objective of the study was to investigate the effects of changes in nutrition of gestating sheep and feed restriction of their offspring on carcass characteristics and meat quality of the offspring. Therefore, this proposed research is designed understand how maternal supplementation of fatty acids effects postmortem quality of the longissimus dorsi, specifically muscle pH, instrumental color, and instrumental tenderness. The tested hypothesis was that lambs born from ewes supplemented with EPA and DHA will have a greater body weight, which is associated with more marbling, greater levels of tenderness, lower muscle pH, and a lighter muscle color when they received an ad-libitum feed intake, but not under a small feed restriction. Twenty-four Dorset crossbreed wethers were used in this 2×2 factorial arrangement study. The two main factors were fatty acid supplementation to the dam during gestation and the level of feed intake. Meat samples (aged 7 days postmortem) were cut perpendicular to the ventral surface into two 6.35-cm sections and randomly allotted to endpoint cooking temperature (target endpoint cooking temperature of either 63°C or 71°C). The remaining section was used for the analysis of uncooked instrumental color and pH. Samples were cooked in a water bath to the aforementioned endpoint cooking temperatures and instrumental tenderness was assessed the following day using the Meullenet-Owens Razor Blade (MORS) test with a TA-XT texture analyzer. It was found that the body fat and yield grade values of the carcasses were changed based on fatty acid supplementation and restricted feed intake (P value for the interaction < 0.05). However, there were no difference for any other variable (P > 0.10). These results indicate that an extended time of fatty acid supplementation in late gestation ewes and restricted feed intake of their offspring will not have a significant effect on the lamb meat quality, but they might change back fat accretion.