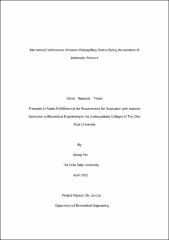 Glaucoma is considered as the second leading cause of blindness all over the world after cataract. The pathogenesis of glaucoma is not well understood, but the widely accepted primary cause is the damage of retinal ganglion cells resulting from chronic elevation of intraocular pressure (IOP). During elevation of IOP, increased stresses and strains occur within the posterior segment wall of the eyeball including the sclera, the choroid, and the retina. This study aimed to explore the mechanical characteristics of peripapillary retina (PPR) based on an ex vivo experimentation on donor eyes. In this study, an ex vivo inflation test of ten human donor eyes by increasing IOP from 5 to 30 mmHg was performed and high-frequency ultrasound images at each pressure step along the nasal-temporal (NT) and superior-inferior (SI) axes were obtained. Reginal displacement of the posterior eye in the vertical and horizontal directions were calculated via the 2D ultrasound speckle tracking technique, and through-thickness (radial), in-plane (tangential), and shear strains were calculated within the posterior eye region. Peripapillary sclera (PPS) and PPR were manually segmented and paired t-tests were applied for PPS and PPR regional analysis. Based on the results, PPR underwent less compressive strain (-0.55 ± 0.25% vs. -2.32 ± 0.74%) and greater shear strain (1.49 ± 0.65% vs. 1.13 ± 0.32%) than PPS. PPR and PPS had similar tangential strain (0.29 ± 0.19% vs. 0.38 ± 0.19%). Colocalized tangential and shear strains were found close to the neuroretinal rim within both PPS and PPR. Our findings showed that PPR experiences large shear strains, smaller compressive and tangential strains. Localized shear and tangential strain could be associated with mechanical damage in this region to IOP-related glaucomatous damage. These results may provide more insights into the role of retina biomechanics in the study of glaucoma susceptibility.