Prioritization of Potential Targets in a Massive Multiplex CRISPR Screen 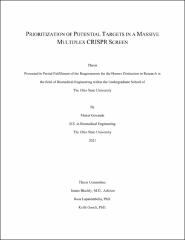 Hematologic cancers, broadly categorized as leukemias, lymphomas, and myelomas, are diagnosed in 3.3 million people globally and account for 10% of new cancer cases in the U.S. every year. In the last decade, newer treatments that directly target aberrant molecular processes, rather than the entire cell, have provided a less toxic alternative to traditional chemotherapy, however, identification of targets for molecular inhibitors is a major rate-limiting step. Recent studies have demonstrated the efficacy of utilizing Clustered Regularly Interspaced Short Palindromic Repeats (CRISPR) as a mechanism to conduct forward genetic screens and combining the results with existing drugs to significantly improve the identification of probable therapeutics. The following study explores an algorithm to process data from pooled CRISPR forward genetic screens to rapidly prioritize potential targets. Currently, targets of interest are manually curated by comparing pooled CRISPR data to existing gene, protein, and drug databases. This is a Sisyphean task as individual gene products vary among individuals, while gene pathway products are consistently similar. Thus, our algorithm will rapidly aggregate genes of interest for a pre-determined synergistic value (p-value, false discovery rate (FDR-value)), while simultaneously performing an efficient gene pathway-level analysis by automatically comparing against known databases including pathway analysis, drug/protein interaction databases, and biomedical literature. The algorithm will quickly display the common gene pathways, the genes involved in respective pathways, their synergistic values in a prioritized fashion, and will include database results in an easy-to-read table to focus on potential targets for future research. The significantly reduced human labor in data processing due to the development of this algorithm will be critical in advancing research of novel drugs and improving the therapeutic outcomes for patients.