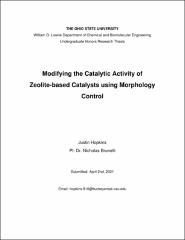 Porous heterogeneous catalysts are driving an evolution in catalysis because they have enabled unprecedented catalytic chemistry. However, these porous materials are plagued by mass transfer limitations wherein the reactants have difficulty diffusing to the catalytically active sites where the chemistry occurs. As a result, researchers have pushed to create nanoparticle catalysts like nanozeolites that achieve shorter path lengths from the bulk solution to active sites at the cost of decreased ease of separation. In contrast, our work seeks to control the morphology by modifying the growth of specific faces of micron-sized zeolite catalysts. In this way, we hypothesized that these morphology-controlled zeolites would exhibit shorter path lengths to active sites and superior catalytic activity while avoiding the separation challenges posed by nanoparticles. In this study, we synthesized Sn-substituted zeolite MFI catalysts using an additive known to increase the plate-like character of MFI crystals, called spermine. Ultimately, we engineered Sn-MFI catalysts with and without spermine under hydrothermal synthesis conditions. After synthesis, we characterized the materials' crystallinity using XRD and the porosities using N2 physisorption. Upon confirmation of successful syntheses, we tested these catalysts in the epoxide-ring opening reaction of 1,2-epoxyhexane using methanol. We compared the epoxide reactant conversion of the modified and non-modified zeolite catalysts at various time points. Thereby, we determined the effects of the crystal modifications on these materials' catalytic activities. Ultimately, these materials had similar catalytic activities as compared to non-modified samples.

2nd Place in Engineering: Life and Natural Sciences at the Denman Research Forum