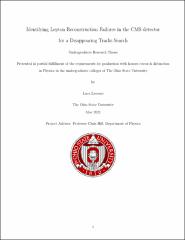 A brief overview of the CMS experiment at the LHC and of related experimental particle physics is given. A recently published search at CMS for beyond the Standard Model long lived particles that have a 'disappearing tracks' signature is summarized. A method utilized in the search, names 'fiducial maps', which addressed lepton reconstruction inefficiencies of the CMS detector is studied in more detail, and solutions are proposed to replace it for electrons and muons independently. For electrons, a deep learning classifier is developed to identify electron tracks that fail to be reconstructed as electrons by the CMS software. This is shown to improve the reach of the search by reducing the electron background by $20 \pm 5$% compared to the fiducial maps; the classifier also retains $6-15$% more signal, except for the longest Higgsino lifetime studied in the search, for which the fiducial map is shown to have slightly better performance. Similarly, a deep learning classifier is developed to identify muon tracks that fail the CMS reconstruction. The classifier identifies $28 \pm 3$% of isolated tag and probe muons that failed the reconstruction; however, this classifier is not able to identify the muons that pass the full selections of this search.