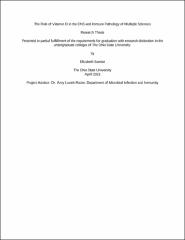 Multiple Sclerosis (MS) is an inflammatory disease of the central nervous system (CNS) that affects over 2.3 million individuals worldwide. In MS, the connection between nerves in the brain and the brain and the body, is disrupted due to the demyelination of nerve axons caused by inflammation. Low Vitamin D (VitD) during childhood has been identified as a risk factor for MS. With new mouse models and technology, it is possible to study the role of VitD during early life and determine the impact that low VitD has on the risk of developing MS. The goal of this study was to determine in what cell types VitD may be important in the risk of developing MS. An inducible-cre/lox system was used to reduce VitD receptor expression in specific cell types in the immune system and CNS during early life in mice. We found that VitD may be important for optimal function of both immune cells and CNS cells to reduce the onset of CNS autoimmunity. Given that VitD is an inexpensive dietary supplement and readily available via sunlight, it provides an avenue to develop preventative measures against the disease.