Suicide During the Great Depression 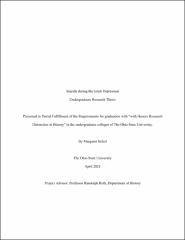 In existing sociological, economic, and epidemiological research, evidence supports a strong correlation between business cycle fluctuations and the suicide rate. However, much of this scholarship uses aggregate vital statistics and does not examine individual cases. It also lacks a clear understanding of the history of the Great Depression. Therefore, while researches convincingly show that the national economy influences its citizens' choices to commit suicide, it is not clear whether there is any evidence of a direct mechanism through which an economic crisis affects an individual's decision of whether or not to take their own life. For this project, my main primary source was newspaper obituaries from 1927 to 1937 that contain the term "suicide" in the Proquest Historical Newspaper database. I limited my search to a few major publications at the time, and I coded information including name, date, age, sex, method, and reason for 470 obituaries during this time period. I then analyzed this set to find whether there were any statistical demographic differences between people who attributed suicide to financial reasons and those that did not. Based on this quantitative analysis and qualitative data including quotes from the obituaries themselves, I found that unemployment rather than the stock market crash or foreclosure had the largest magnitude in directly influencing individuals' decisions to take their own lives. The prevalence of employment related suicides during the Great Depression rather than purely loss of cash or assets suggests that unemployment may lead to the loss of more than just an income stream. While these obituaries are only a sample, the qualitative evidence is telling. If the state of the economy can influence people's decision on whether or not to commit suicide, then modern day policy makers can learn from the actions of leaders during the New Deal to help guide their decision making in the current coronavirus unemployment crisis. Further research into state level foreclosure data, unemployment rates, government relief spending, and suicide rates using machine learning could provide further statistical insights from the Great Depression applicable to today's economic crisis.