Changing Trends in Research on Turkish Migrants in Germany 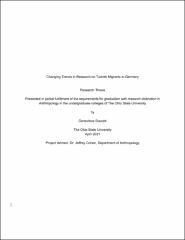 Turks started immigrating to Germany in the 1960s and 1970s as guest workers, or "Gastarbeiters." Around 3 to 5 million Turks have moved to Europe in the past few decades, with a majority settled in Germany (Sirkeci & Cohen, 2016). Between 2010 and 2016 about 1.35 million migrants came to Germany, of which about 850,000 were Muslim (Pew Research Center, 2017). A little less than half of these migrants were refugees and about 86 percent of the refugees were Muslim. Today, as more Muslim refugees settle in Germany, there has been a rise in xenophobia among Germans and Turkish migrants often must confront ethnic discrimination (Sirkeci, Cohen & Yazgan, 2012). The goal of this research is to review what topics related to the physical and mental health of first- and second-generation Turkish migrants to Germany are chosen for research and how those topics relate to changes in treatment of Turkish immigrants in Germany since the early 2000s.