Analyzing the Connection between Sexual Minority Status and Suicide Outcomes: Defining the Role of Socioeconomic Status 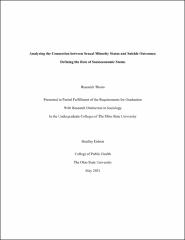 Funding for the completion of this undergraduate research thesis was provided by the College of Public Health Undergraduate Studies Committee (USC) in the form of an Undergraduate Research Scholarship.