A Comprehensive Examination of Trumpism: American Politics as a Zero-Sum Game 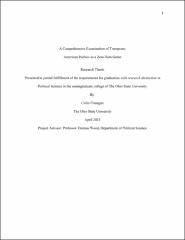 This thesis investigates the effects of demographics on modern American electoral politics. Despite recent sociological works and media conjecturing, there is little agreement on increasing polarization and among what lines the poles have been pulled to. This thesis includes data from the 2019 American Community Survey Five Year Estimates in its Ordinary Least Squares regression model which accounts for divisions among racial, economic class, and geographic differences. Using this data, I find a shifting partisan alignment on educational and urban-rural fronts, while racial divides have continued at roughly the same rate as in the past. I also find evidence of retrospective economic voting in the 2020 presidential election. These findings confirm the theories put forth by sociologists that American politics are becoming more polarized than at any point in modern history, and it proposes that the ideological homogenization of both the Democratic and Republican parties is to blame.