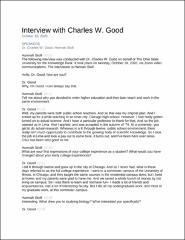 Charles Good's interest in biology was piqued in high school, so he went on to study the subject at the University of Illinois. After earning his Bachelor's degree, he first taught high school in Chicago, but he found he was interested in doing more scientific research than the K-12 environment would allow. So he went on to earn a Master's degree in Biology from the University of Illinois and a Ph.D. in Botany from Ohio University. He was hired in 1974 at the Ohio State-Lima campus and spent his entire career there until retirement. In addition to teaching, Dr. Good conducted research in paleobotany, even securing a National Science Foundation grant for work in which he was the sole principal investigator. Good is also an expert on the Lima campus's Tecumseh Natural Area, a small woodland area that escaped development into agricultural land during European settlement of Ohio. Good volunteers at the Lima Memorial Hospital front desk, and he has also worked with the Boy Scouts of America, taking youth on camping trips to explore nature.