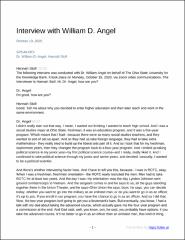 William Angel attended Ohio State as an undergraduate, and although he first thought he would become a high school teacher, he enjoyed taking a political science course so much his junior year that he obtained a Master's degree in the subject in 1971 from Ohio State. He earned a Ph.D. in Political Science in 1978 from the University of Texas. He was subsequently hired at Ohio State-Lima and spent his entire career there until he retired. He remains at as a lecturer on the subjects of Comparative Studies and Latin American politics. He served as the President of the OSU Lima Faculty Assembly twice, and he has served in the University Senate twice. Additionally, he chaired the Academic Planning Committee, updating curricula and increasing the number of majors and minors available to Lima students. Angel discusses how scheduling changes in the 1990s made commuting easier for OSU Lima instructors from Columbus or out of state, meaning that fewer professors live within the community where they teach. He also reflects on the technological advances and changes that have occurred on campus, especially in response to the COVID-19 pandemic.