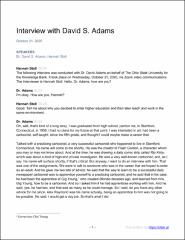 Although David Adams aspired to be a professional cartoonist when he was in high school, he loved the academic environment of his undergraduate alma mater, Piedmont College, so much that he decided to earn advanced degrees so he could pursue a career in higher education. He earned a Master's degree in Sociology from the University of Georgia, and a Ph.D. in the same subject at Ohio State. He then taught at Ohio Northern University from 1968 to 1971, when he was hired to teach Sociology at the Ohio State-Lima campus. He spent the rest of his career there until he retired in 1995. That year he received the Alumni Association's Award for Distinguished Teaching, which he considers the most important award he has ever received. While he was teaching he served as both the Secretary and President of the OSU Lima Faculty Assembly, and he and his wife, Estella, were involved with United Way and the Riverside North Neighborhood Association, among other charitable and local political work.